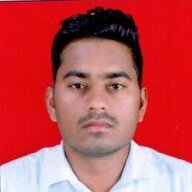 Why Concrete Cracks?
Generally, it is assumed that cracks are due to some problems in the foundation, whereas it is not always correct and should not be considered failure of
structure or improper design or bad quality work. Generally, 1/16 to 1/4-inchwide cracks is acceptable limits.
The American Concrete Institute as per ACI 302.1-04 addresses this issue, even the best construction & concreting cannot prevent cracking in concrete, and 0%
cracks is an unrealistic thing.

Causes of Cracks in Concrete
Causes of cracks in concrete can be many summarized as:
· Concrete expands and shrinks due to temperature differences
· Settlement of structure
· Due to heavy load applied or
· Due to loss of water from concrete surface shrinkage occurs
· Insufficient vibration at the time of laying the concrete
· Improper cover provided during concreting
· High water cement ratio to make the concrete workable
· Due to corrosion of reinforcement steel
· Many mixtures with rapid setting and strength gain performance have an increased shrinkage potential. 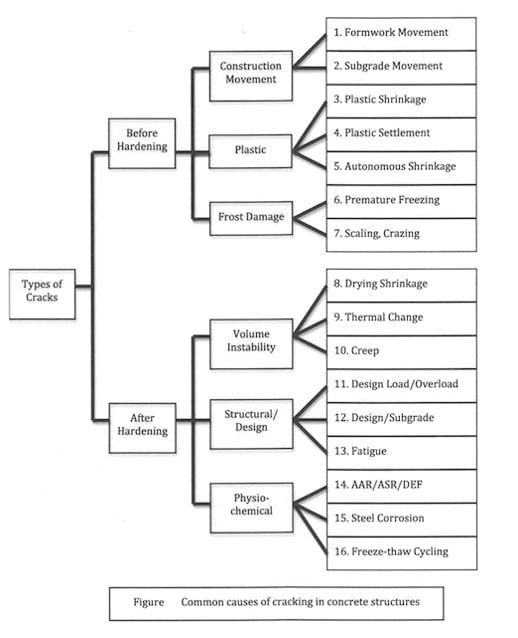 How to Prevent Cracks in Concrete Structures?

Preventive measures to avoid creation of cracks:
Preventive measures must be taken at the time of concreting and later to reduce cracks after concrete formation. Main factors are:
Reduce Water Content in Concrete:
A low water cement ratio will affect the quality of concrete. W/C ratio is weight of water to the weight of cement used. A lower w/c ratio leads to high strength in concrete and lesser cracks. W/C ratio shall not exceed 0.5 in concreting, which reduces the workability of concrete which can be covered by use of plasticizer or superplasticizer. Less water content increases the durability of concrete Concrete expands and shrinks with changes in moisture and temperature. The overall tendency is to shrink. Shrinkage is the main cause of cracks, when concrete hardens it evaporates the excess water and thus shrinks, so lesser the water content, lesser is the shrinkage. Cracking shrinkage in slabs is ½ inch per 100 ft. The shrinkage of concrete pulls the slab apart showing it as cracks on surface.
Proper Concrete Mix Design and use of Quality Materials :
The concrete itself must be properly proportioned, and properly mixed. If you use too little cement, you can almost guarantee cracks. Using too much water will make the concrete weak, leading to cracking. Use good quality aggregates so will produce lower shrinkage concrete. Hard, dense aggregate, using a large top size aggregate and optimizing the gradation of the aggregate is able to reduce the shrinkage of the concrete. If the aggregate is of poor quality, maximizing the size, gradation, and content may have little effect on the concrete shrinkage. Mixing large aggregate with poor qualities to a midsize aggregate with good properties may increase the shrinkage of the concrete. Avoid the use of shrinkage-promoting admixtures (such as accelerators, dirty aggregate which increases water demand and using a cement with high shrinkage characteristics.
Finishing of Concrete Surface :
Use proper finishing techniques and proper timing during and between finishing operations. Flat floating and flat troweling are often recommended. Avoid overworking the concrete, especially with vibrating screeds. Overworking causes aggregate to settle and bleed water and excess fines to rise. Don’t finish the concrete when there is bleed water on the surface, finishing leads the water back to concrete instead of evaporating thus leading to cracks.
Proper Curing of Concrete
Stop rapid loss of water from surface or drying of concrete due to hydration (liquid concrete converts to plastic and then to solid state) causes drying of the slab, so it’s recommended to cure the slab for several days. As soon as the concrete on slab sets its general practice to make boundary with mortar on the slab and keep it filled with water. Cover slab with cotton mats soaked with water or spray on a curing compound also prevents loss of water.
The concrete should not be subjected to load during the curing period, which can last up to one month.
Proper Placement and Vibration of Concrete:
Properly placed, vibrated, finished concrete reduces the chances of producing cracks. Properly vibrate to release entrapped air which later leads to cracks.
Proper Compaction of Soil to Prevent Settlement Cracks in Concrete:
The area below the concrete slab has to be compacted properly and in layers so as to ensure against settlement of soil later. If the soil is left loose it will settle over time and create cracks on surface. This applies in the home as well as constructions on highways. Providing Control Joints in Concrete
Control joints should be located at regular intervals so as to adjust the shrinkage of concrete. Generally, for 4-inch depth of slab joints are provided 8 to 12 ft. apart. Control joints are pre-planted cracks. An engineer should have an idea that concrete will crack at control joints instead of cracking any other location.
Some Other Preventive Control Measures for Cracks in Concrete:
· Applying good acrylic silicone sealer yearly to concrete works
· Avoid calcium chloride admixtures
· Prevent extreme changes in temperature.
· Consider using a shrinkage-reducing admixture
· Warm the subgrade before placing concrete on it during cold weather
· Consider using synthetic fibers to help control plastic shrinkage cracks.
Reactions: Khemu ram soni, Vijaypal singh, TEJAL SAWANT and 1 other person 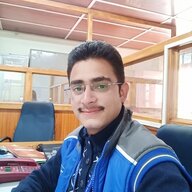 Wonderful
You must log in or register to reply here.